What holds legacy banks back to innovate as fast as fintech startups?

Legacy banks are often portrayed as slow and old-fashioned when compared with innovative and digital-savvy fintech competitors. However, it’s often not the lack of smart and driven people or initiatives that hold traditional banks back. It’s the legacy IT systems. Banks that haven’t integrated and upgraded their IT stack to the cloud have to put the breaks on projects that require to touch any legacy IT.

Understandably, this is a frustrating constraint.

According to Wall Street Journal, last year Europe’s banks planned technology investments worth of $77B, and their U.S. competitors around $105B. Technology-focused startups use this opportunity to build banking infrastructure from the ground up and work directly with legacy banks.

After all, front-end related innovations are only possible via robust and scalable backend systems.

Romanian fintech startup FintechOS offers exactly that. They just raised $14M to expand their Technology-as-a-Service platform that lets banks and insurance companies pull data from their internal silos and enrich them in the cloud. From there, banks can use the aggregated data to develop personalised customer journeys and automate processes: 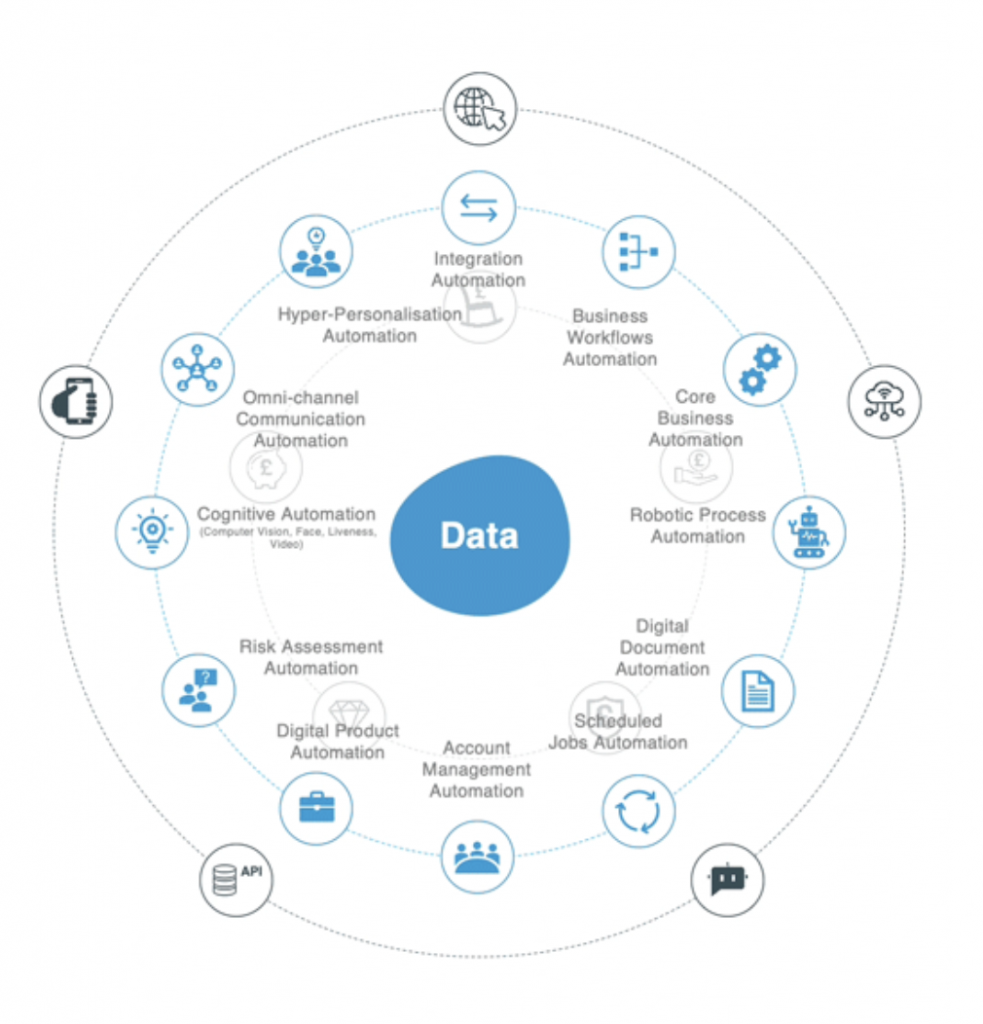 Banks increasingly rely on these new backend-tooling providers in order to keep up with the innovation pace of fintech startups. This trend was signaled this month by HSBC, which has signed a global deal to use aggregation technology developed by Bud.

Instead of taking on the mammoth task to overhaul the entire IT stack themselves, the best way forward might therefore ultimately be to develop a functional tech M&A unit and to fortify such partnerships with B2B2X infrastructure providers.

The advantage of aggregation and integration technology is that it allows banks to move from one-sided financial services providers to enablers: Enabling customers to get a holistic, predictive view on their current financial situation, to receive personalised advisory based on historical spending patterns, asset allocation and other 3rd party data, or simply to receive faster and accurate customer service.

How banks can start with their transformation from providers to enablers is illustrated in our last whitepaper about digital product portfolio innovation. Have a look here:

An overview of Softbank’s fintech portfolio

Softbank, currently under fire for burning billions of dollars via its Vision Funds, has a remarkably international portfolio of fintech investments. Quartz released an overview of the fintechs that were lucky enough to receive a check by the Japanese conglomerate, such as Grab, Paytm or OneConnect: 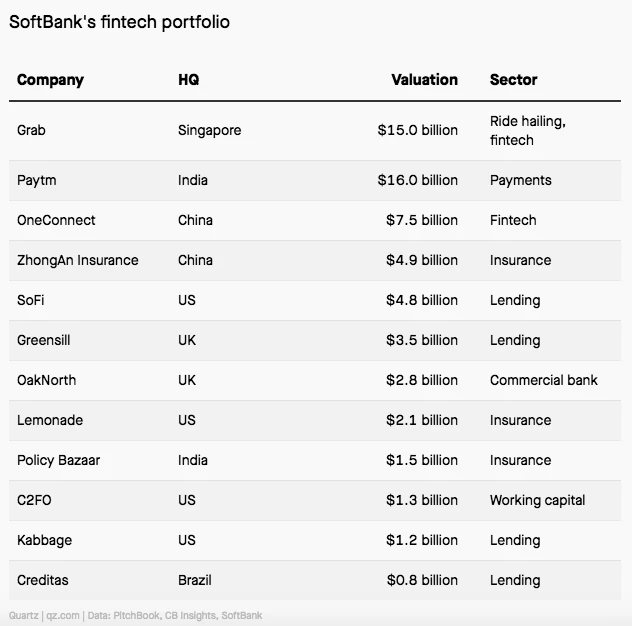 As consumer fintech is a costly business with yet unproven paths to profitability, the article rightfully remarks that valuations of portfolio companies like SoFi or Greensill are likely to be inflated by Softbank’s cash infusion.

The incubent venture success story of the year? Goldman forced to put on the breaks on its fintech Marcus

Finextra: Goldman Sachs to put the brakes on Marcus expansion in UK

Usually, fintechs launched by incumbents struggle to create impact. For instance, JPMorgan Chase has shut down its digital venture Finn, only one year after launch in 2018, according to The Wall Street Journal (€). The app cannibalised JP Morgan’s core business, threatening the metrics and bonuses at the core organisation. It was only a matter of time.

Similarly, RBS just launched their own challenger bank, Bó. The new proposition is received with mixed feelings: James Cook of The Telegraph judged the customer experience as a “confused mess” (€):

“(…) Bó doesn’t have a so-called “killer feature” that could attract anyone who has used one of its rivals.”

On the contrary, Goldman launched Marcus as a true greenfield proposition, offering a simple digital savings account with solid interest rates (1,5%). Part of Goldman’s strategy to add $5 billion in revenue by 2020 is to push new consumer-facing businesses, such as the cooperation with Apple on a new credit card offering and Marcus.

The strong growth in users, and ultimately deposits, now forces Marcus to slow down, as Financial Times notes:

“Analysts said the rate cut on the Marcus account signalled that Goldman had less desire to attract deposits as it approached the £25bn ceiling that would compel the bank to comply with the UK’s “ringfencing” legislation.

British banks that hold more than £25bn — about $31bn — in customer deposits for a sustained period must legally “ringfence” or separate their retail and investment banking operations.”

The key takeaway is that Marcus is laser-focused on solving a very fundamental customer need: a frictionless mechanism to store away and grow money. Marcus doesn’t have any fancy features, not even an app. It simply focuses on getting the basics right.

As fintech has become one of the biggest venture capital pools, many founders have prioritised aggresive growth over profitability. As long as fintechs periodically make headlines after acquiring another million users, investors are happy.

The underlying assumption is that the bigger the user base, the easier monetisation will become. It’s a valid rationale in consumer tech, however the article points out it doesn’t apply in the heavily regulated banking industry. Meanwhile, OakNorth, a technology-driven SME lender, has has proven that profitability and growth aren’t mutually exclusive:

“For us, it came from having a clear idea of what customers value and are willing to pay for, as well as developing solutions that help improve the effectiveness and efficiency of existing institutions, rather than trying to replace them.”

We’ve covered the fintech-gaming cross-over before. With a projected 2.7 billion gamers globally by 2021, gaming is becoming a major global industry characterised by a highly engaged user group. While some games, such as Fortnite, have provided a blueprint for next generation fintech use cases, now there’s the first major gaming company making serious moves into banking.

Around mid-2020, the Monetary Authority of Singapore (MAS) will declare which companies will receive one of its five digital banking licenses.

One of the contenders for the license is Razer. It is the world’s leading lifestyle brand for gamers, with over 70 million users across its software offerings. Among its services are Razer Gold, one of the largest virtual credit services for gamers globally, and Razer Fintech, one of the biggest online-to-offline digital payment networks in Southeast Asia.

“Instead of fighting local banks, Razer Fintech plans to target the youth and millennial segment in Singapore. Eventually, it aims to roll out globally as Razer Youth Bank, which the company said would be the first bank of its kind.

Razer is trying to leverage on its large, young fan base and its existing digital payments networks Razer Merchant Services and e-wallet service Razer Pay. It’s also looking to boost its global presence—the company is based in Singapore and San Francisco but has retail stores in places like London, Las Vegas, Hong Kong and Taipei.”

Razer Youth Bank will crush traditional banks at a game they never learned to compete in.

Traditional banks move into digital banking because they’re loosing out on younger demographics that are increasingly migrating to mobile-first neobanks. It forces them to overhaul their entire IT stack, as covered above, and with that changing their way of operating the business and serving users.

However, even after digitalising the entire product portfolio, they’re still a bank. A digital money storage unit, a list of transactions, an app or piece of plastic to make purchases. If they’re ambitious, they add a few features on top, like intelligent push notifications, card freezing, spending trackers or virtual sub-accounts.

However, the use cases traditional banks can offer on their own are limited. After all, the only real value proposition is that they’re a highly regulated entity that keeps your money safe.

Gaming companies like Razer instantly get access to its core demographic through its existing platform. With zero customer acquisition costs, a highly engaged users base, real-time access to contextual data and seamlessly integrated banking services, Razer Youth Bank will crush traditional banks at a game they never learned to compete in.

Razer Youth Bank would look anything like a traditional bank. On top of that, they partnered with powerful strategic investors:

… as well as platform partners:

The impressive list of partners can be found here.

Migrating banking-related services into to third party apps, where the users already are, is the ultimate blue ocean. It’s not about building a new banking app, but leveraging banking in new contexts.